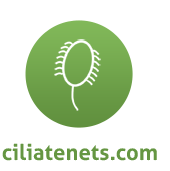 The latest results of the project were presented at the annual meeting of the German Society of Protozoology (DGP) in Vienna (Austria, February 20- 22, 2019):

Dominik Forster (University of Kaiserslautern, Germany) presented HTS data and network analyses of Lake Zurich: “Learning from social networks: be connected, be discovered, be in the trophic web.”

Barbara Kammerlander (University of Innsbruck, Austria) presented the seasonal and spatial distribution of the ciliate assemblage of Lake Mondsee including the dynamics of other food web players: „Let the show begin! Ciliates in the spotlight of the aquatic food web of Lake Mondsee, Austria”.

Gianna Pitsch (University of Zurich, Switzerland) showed the comparison of ciliate DNA metabarcodes with morphospecies counts based on a three-year dataset of Lake Zurich: „Seasonality of planktonic freshwater ciliates: Are analyses based on V9 regions of the 18S rRNA gene correlated with morphospecies?”